Now it is time to further elaborate on this idea, and establish the explanatory conceptual framework that will be the base of my future posts, by adding to it more details, and introducing the theoretical and practical terms that have an important value in the modern discussions within the general topic of using ICT for Development for social change. These are the concepts that emerge in the overlapping areas, as it is evident in the following diagram. From the overlap of Activism and New Media/Technologies we have the emergence of the field of Digital Activism, from New Media/Technologies and Design we have Human-Computer Interaction for Development (HCI4D), and from Design and Activism we have Design Activism. These three fields will be the specific themes that we will explorer in the next posts, but we have always as a general context the process of Decolonization within the international development area, and with a Global South perspective. 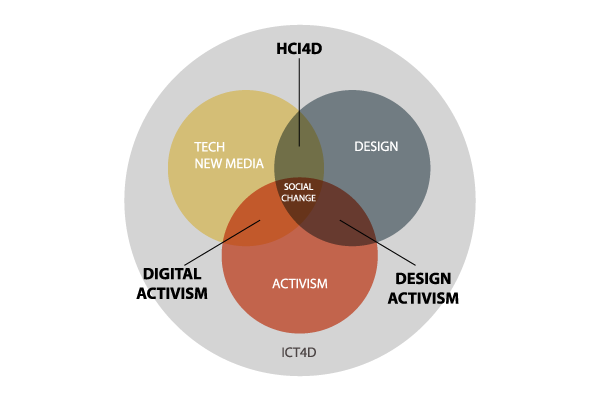 According to Heeks (2018, p.10), technology can be defined as “devices or techniques that apply knowledge in order to complete a particular task”. Indeed, in the age of internet, the New Media and Technologies are affecting and mediating tasks in all the aspects of our lives, and they are being applied in a wide range of activities, like in education, health, entertainment, governance, but also in activities of dissonance and resistance. With focus on the latter use of new ICTs, as tools for activism for sociopolitical change, we can argue that “digital connectivity reshapes how movements connect, organize, and evolve during their lifespan.” (Tufekci, 2017, p.xix), and thus, there is a modern demand on studying the effect that technology has on the attempts to tackle various development related issues, like power relations, democracy, knowledge and identity creation, racial and gender equality etc. After all, as Eriksen claims (2014, p.80), “over half the global population is to some extent affected by the telecommunications revolution”, and that has a tremendous impact on humanity, even if there are still places and individuals that are not being affected by it, at least in a primary or in a conscious level.

Design is a wide ranging field, and includes disciplines such as interior, graphic, industrial design, to name a few. In our discussion, and in relation to technology, we will talk about design as a theory and practice that creates new technologies or it uses existing ones in order to design solutions and projects, within the international development. More specifically, we will focus on Human-Computer Interaction, as it is “a multidisciplinary field of study focusing on the design of computer technology and, in particular, the interaction between humans (the users) and computers”(What is Human-Computer Interaction (HCI)?, n.d.), and especially as it is used in the development sector (HCI4D). We will also try to tackle the issue of Decolonizing Design, as this is also a heavily colonized area. In order to do so, we will draw parallels between, on one hand, the Participatory Paradigm and the Postcolonial Studies in the development theory, and on the other hand, the Participatory and User Centered Design, as tools, theories, and practices that share the same concerns of the local and the cultural, and focus on people’s participation in the problem definition and the concept creation. (Tufte, 2017, p.23). By so doing, we have the possibility to design ICT4D solutions, that can be used both in the mainstream international development but also in the more unconventional practice of activism, with a more sustainable and impactful potential.

Activism is a term that has different meanings across time and places (Schwedler and Harris, 2016, p.3), but also there are multiple ways of practicing it (Zhang, 2013, p.258). Nevertheless, activism is about collective actions (Bohemia, Zajzon and Prendeville, 2019, p.845) that “are woven into the fabric of human history” (Tufekci, 2017, p.xix), and one can argue that it has the potential for social change around topics that can be seen as relevant to the international development sector. More specifically, it can raise awareness on a specific topic, and inspire and mobilize people so they can collectively act in order to challenge the dominant discourses that have been established and perpetuated by hegemonic power institutions, and thus achieve social change. In that way, it can be a valuable form of act in the struggle for decolonizing our modern societies, both in the north and in the south. In these struggles, new ICTs, as we have already said above, do affect the practice of activists and social movements, but so does design, because within the scope of design activism, “are being curated new forms of design within social practices finding inspiration in ‘alternatives futures’ that deviate radically from the current establishment”(Bohemia, Zajzon and Prendeville, 2019, p.858).

Stay tuned as we will explore further these topics during the next weeks and in the next posts, and do not forget to follow us on Instagram and Twitter!!