Hashtag activism is the act of supporting a cause via social media, a growing phenomenon that does not require more from the netizens than posting, “sharing”, “liking” or “retweeting”. A growing but not entirely new thing, since the divisive history of “hastagh activism” is somehow the continuation of the old debate between those who think that raising awareness is activism in its own and does who don’t. So, does this online or social media activism allows for real change to occur in our societies or is it nothing more than slacktivism?

Slacktivism, from the words “slacker” and “activism”, refers to the actions that support a cause involving no effort on the part of participants, a feel-good activism. These actions are mainly, although not exclusively, via social media. Critics state that users perform them just for their own gratification, producing no tangible effect for the cause and meaning no real engagement to actually make a change. This is however an oversimplified explanation.  There are cases of  slacktivism achieving the right results, such as is the ALS Ice Bucket Challenge campaign, that resulted in millions of dollars for ALS research and need to be taken into account when studying new activist behaviours.

The Instagram Infographic Industrial Complex refers to the highly accessible, social justice related infographics that have lately invaded Instagram. This platform has increasingly become a platform to share political content and its slideshow function has brought a new way of sharing social justice related information. The popularity of these designs, inspired in traditional advertisement, reached a peak of popularity during the Black Lives Matter Movement of 2020, offering resources for activists and information on the historical conditions leading up to the protests. These famous pastel-coloured infographics can be helpful to develop understanding on a cause in an never before seen accessible way. The criticisms they receive accuse them of being a source of disinformation, of providing superficial information and facts, and not leading to further research/fat-checking, thus propagating slacktivism and becoming a form of perfomative activism.

Perfomative activism is a pejorative term to describe the act of supporting a cause or social issue to gain attention from others, to monetize or achieve recognition, without really caring about making a difference in the cause. It is not something new created by the use of new media, but it is easier to perform it nowadays, as all it takes is a milisecond to press the share button. It is also highly related with the white saviour complex. 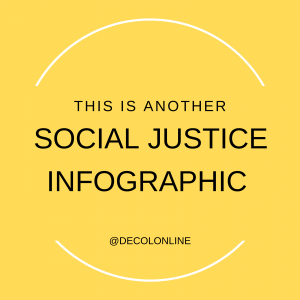 Some personal questions on online activism

How do you, citizen of the North, inhabit this online world of the Hastagh era in which we live? You might be conscious that digital activism, new media and technology, are not equalitarian spaces and are not available for everyone, but do you act accordingly? How do you recognize the power relations and inqualities in these virtual spheres and how do you perpetuate them?

It is likely that if we see one of the many posts of a white Western influencer/celebrity promoting their altruism by sharing a photo of them holding an African kid, we soon feel something is wrong in the message they are sending. However, when a white Hispanic man, George Zimmerman, killed Trayvon Martin, a black teenager walking home in Florida, and the “I am Trayvon Martin” campaign went viral among white netizens to show solidarity, are we aware that it would perhaps be more accurate and beneficial for white people to say “I am George Zimmerman”? As explained by Tim Engles in “Racialized slacktivism: social media performances of white antiracism”, the various forms of online activism/slacktivism performed by white people under the “I am Trayvon Martin” campaign, turned the phrase into useless and made it lose its symbolism. In this respect Engles reproduces the very interesting words of a young white woman in a Youtube video that went viral:

“I know you wear that shirt to stand in solidarity with Trayvon, Troy, and other victims of injustice. The purpose of those shirts is to humanize these victims of our society, by likening them to the middle-class white activist wearing it. . . . A more accurate t-shirt to display on my white body would be “I AM GEORGE ZIMMERMAN.” Zimmerman and I were indoctrinated in the same American discourse where we learned that the “other,” particularly black men like Trayvon and Troy, were less human and were to be feared. . . . Realizing that you more closely resemble a homicidal oppressive force than a helpless victim is a really uncomfortable thing to do, I know. But wanting to identify with the victim is weak, and immature when it is not an accurate representation of reality. Real change is effected when we own up to our actions, our privilege, and our complicity with the system that murdered Trayvon and countless others”.

So, can true and benefitial allyship happen in social media? Is the white anti-racist, as Kil Ja Kim argues the “Open Letter to White Antiracists” published on the Race Traitor journal’s website, an oxymoron? The popularity of the Blackout Tuesday movement led to criticism from protesters and activists who complained about the difficulty of using these hashtags to gather information about police actions and protest movements and share important resources. Do you think whether you might be drowing attention from important information from experts and “real activists”· when sharing one of the popular @so.informed infographics?

I am personally fascinated by the way we citizens of the West use new media and technology as tools to fight for social justice.  All of the above are just some random initial thoughts on the topic that I would like to further explore and debate with you in my upcoming posts here.

Are we able to deconstruct ourselves and identify our colonialist attitudes in our online lives? As my fellow students have already pointed out in previous posts, we are here to rethink, among others, our assumptions about new media and technology as tools for Development, to reflect on the duality of these, the power relations they perpetuate and our individual role in all this. We hope to read your thoughts too!