I am currently working on some future blog posts, where I seek to explore the complexity, duality and contradictions regarding new media politics, data journalism, and connectivity for development. Just a few steps into the analysis, it becomes evident how everything has to do with different relations of power in all these three fields:

In Nigeria’s WhatsApp Politics, Nic Cheeseman, Jonathan Fisher, Idayat Hassan, and Jamie Hitchen studied the Nigerian elections of 2019, and found it very clear that WhatsApp was operating as a liberation technology that strengthened democracy and simultaneously contributed to political turmoil that challenged it: ”These are not mutually exclusive outcomes, but rather two sides of the same coin.”

Obviously you cannot say that all technologies are good or that all of them are bad. However, that doesn’t mean that they are neutral or objective. There is always someone creating the technology, someone owning it, someone distributing it, and someone using it. And all these people are embedded in several power relations and power structures that affect the struggle between the state and the people – and the democracy.

Data journalism comes with both opportunities and challenges. One opportunity is to strengthen democracy, since data journalism contributes to shared knowledge and informed citizens. Eli Pariser writes in The Filter Bubble that democracy relies on this, that informed citizens with shared knowledge are needed in order to be able to act together to solve our collective problems.

Data journalism has a key role here, but its conceivable success is dependent on the context of any specific country. How much data is being made available, how trained are the journalists in handling the huge amounts of data, and can media companies afford to prioritize data journalism training and practicing?

And here is where the global power relations enter the arena. If data journalists in the Global south lack training and money, and rely on western donors, we have something that looks a lot like a recolonization. What are the consequences of such interventions in the Global south, both in local journalism and society at large, when journalistic ideals of the Global north is being implemented?

There is also the discussion of objective data and if such data really exist? Someone always has the power to choose and present different data. Or as Hassel Fallas writes in his chapter in Data Journalism in the Global South: ”The challenge of investigative journalism in the era of big data is the same as always: keep an eye on the exercise of power and its consequences on people.”

There is a global strive for increased connectivity, but even though this will foster development for some, it comes at a cost, the colonization of data and the dependency on powerful global platform capitalists. In international development there are many informatization strategies, because of the belief that the use of new ICTs will foster socioeconomic development in the Global south. However, new media and ICTs have different roles and impacts in specific development and social change contexts, depending on societal, cultural and ethical aspects.

Technological tools confirm socially and culturally held stereotypes and injustices, both locally and globally. Algorithms are used to optimize website experiences, most often through lists of the ”most popular” purchases or searches, or through behavior-based personalization. Both are problematic. Firstly, to display the behavior of the majority as the most important and most true, silences and erases the minorities, which naturalizes the unequal power structures. Secondly, is behavior-based personalization not just Father Capitalist using people as nothing but raw data, taking our data to increase his profit, a form of digital colonization and digital slavery? 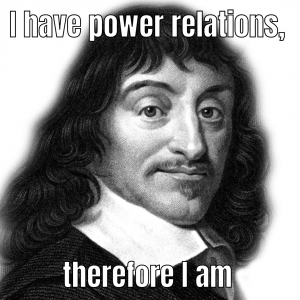 I could not help but to make another meme, this time about how basic power relations are to us human beings. René Descartes is one of the greatest celebrities from the Enlightenment, the era that formed the power relations still highly topical today. His rationalist philosophy is one of the cores of the age of reason, the Enlightenment, which put Europeans in the centre of civilization and all human achievements. In Postcolonialism, Decoloniality and Development, Cheryl McEwan writes that the Enlightenment firmly planted ”the idea of the West as superior and more advanced along a singular path to progress and modernity”.

Central to the Enlightenment philosophy is the need to construct “the Other” in order to be able to define “the Self”. Such binary oppositions have shaped western knowledge since then, and still establishes the normal, normative good in contrast to the abnormal, deviant bad. These binaries are obviously both including and excluding by its very nature. If we belong to the good norm, we are included, otherwise we are excluded. Or as Achille Mbembe puts it in Necropolitics: ”In order to get together, it is necessary to divide, and each time that we say ’we’, we must exclude someone at any price”.