Stop filming us: a documentary film about white saviorism

STOP FILMING US: A documentary about white saviorism

The documentary film ‘Stop filming us’ was released earlier this year and is now being presented in several locations (such as the Human Rights Film Festival Berlin, the Africa museum, Congo in Harlem and several Dutch universities). In the film we see Dutch filmmaker Joris Postema in Goma (Democratic Republic of Congo), where he follows three young Congolese artists. They talk about their struggle and frustration with the western dominance and their city being portrayed as dangerous. Postema’s position as a western filmmaker is being questioned. The movie is intended to create a dialogue between the Congolese reality and the Western perspective. The question however then rises whether a western filmmaker can really give an honest and Congolese perspective. How do the Congolese feel about these white saviors? And are they actually doing something good when trying to do good?  Is it even possible for a western filmmaker to leave the stereotypical and western thoughts behind? 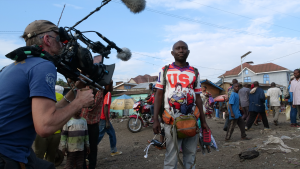 Most of the imagery coming from Goma is negative and it is westerners that are in control of which information is being spread and how the city is being represented. Western NGO’s are also expecting a certain type of images. Most humanitarian images are intended to awaken emotions with the viewers and trigger a certain response out of guilt. These images clearly emphasize a victim-savior relationship and portray stereotypical pictures. Not many people get to see the real image. The photograph below for example portrays a young girl with a sad look in her eyes, although she is surround by lush and green fields. Even though the photo is made by Congolese photographer Ley Uwera, she does acknowledge that she works for western NGO’s and she has a contract. She needs to give them the type of images that they want to see. 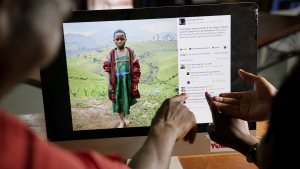 The young Congolese artists in the documentary are trying to show the Congolese reality, which many foreigners never get the chance to see. It is obvious that we need to change the perspective. The main issue the film brings up is that it is extremely difficult to change this perspective. Not only white people that come to Africa are indoctrinated by the stereotypical images, also the Congolese themselves are and I quote: “a colonized African” or one  “with an NGO mentality”. The young filmmaker, Bernadette Vivuya, is looking to fund the second part of her documentary film about colonialism. She is advised to contact the ‘Centre Wallonie-Bruxelles’ that has an office in Kinshasa. How contradictory is it for someone to have to ask for funding to their former colonists to create a movie about the consequences of the colonization. This only confirms the white dominance that is still present today and this way the real Congolese perspective will never be shown or will always be influenced by the former perpetrators. 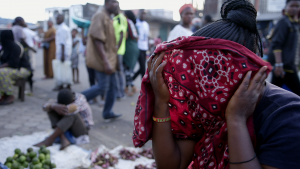 Although some of the points that come up in the documentary are interesting, important and relevant; we need to step up and not deem it normal that a western filmmaker makes a movie about the Congolese perspective on white saviorism. This documentary definitely is food for thought. As a young non-professional aid worker, one needs to wonder whether or not good can actually be done by volunteering abroad and by going to Africa ‘to help’. I honestly felt a bit upset after seeing the movie. It could be that the makers intended to spark this emotion and make the audience wonder and reflect. However, it bothers me that the western filmmaker – who could have done his research before leaving – comes over as ignorant. Not being able to speak French and using a translator is only one reason. He is also completely unaware of certain other problematic behavior – such as giving food to children on the street.  It shows that the process of decolonization is still a long one. What I appreciated about the documentary was the last scene where the movie is shown to some young Congolese and they get the chance to give their opinion about the film. Many of them tell the filmmaker that he can go, others believe he could stay.

Although there are some flaws, this documentary might have increased the discussion and let people – mainly westerners – think and reflect upon their actions before coming to Africa. Have you seen the documentary? Do you want to see it? Let me know what you think about the film.

Ademolu, E. & Warrington, S. (2019). Who gets to talk about NGO images of global poverty? In: Photography and Culture, August.